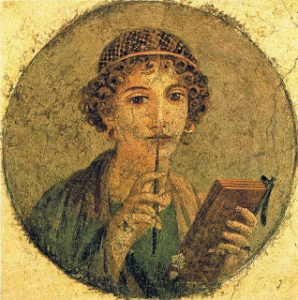 A Roman tomb painting depicting a young woman with a wax tablet such as the one Eleri used.

In my second novel, The Fury of Dragons, my character, the slave girl Eleri, is learning to read and write Latin.

To practice, she writes her translations out on wax tablets.

These were slim sheets of wood with a thin poured layer of wax. The pointed end of a stylus stylus engraved the letters in the soft surface of the wax.

When you needed a new page, the wax softened easily over a small flame. Then you smoothed the surface with the broad end of the stylus.

It’s thought that the Greeks started using wax tablets about 800 BC, along with leather scrolls.

The remains of wax tablets that date to 62 AD have been found in the Pompeii excavations, in the house of Lucius Caecilius Iucundus, a banker. Lucius lived on Sabiae Street in Pompeii and  recorded his transactions, mostly loan records and auction receipts, for wealthy citizens on wax tablets.

Two thousand years later, we can read his business notes!

Above is a fabulous fresco from the tomb of a Roman lady. These frescoes frequently pictured the deceased with a favorite item. Perhaps she entertained idea about becoming a writer? The selection of her wax tablet and stylus for her tombstone fresco is telling.

Another archaeological find a bit different from wax tablets are the wood tablets found in Vindolanda, a Roman fort just south of Hadrian’s wall in northern England.

Most of the tablets survived in a waterlogged garbage heap in a corner of the commander’s house.

To date, archaeologists have discovered over 400 tablets, made from thin slivers of wood between one and three mm thick. Some of the woods used were birch and alder. The size of a postcard, the correspondent wrote in ink and then folded the wafer-thin wood in half to write the address.

Most date from around 100 AD and they reveal a wealth of information about daily life in the fort. Some are mundane, such as shopping lists and requests for warm socks.

And some are poignant, such as the birthday party invitation sent from Claudia Severa to Sulpicia Lepidina, wife of Flavius Cerialis, commander at Vindolanda.

Here  is a reproduction kit to make your own wax tablets. Reenactors who participate in events like PENNSIC might use a kit like this to complete their costume. 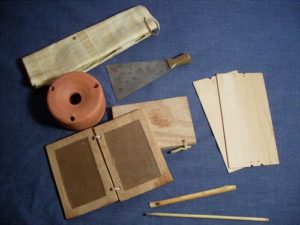 Wax tablets have been around for thousands of years. If you would like to read more about wax tablets and the making of them, check out www.randyasplund.com for a very informative article.