Most kids who went to Catholic school in the 50’s and 60’s know about pagan babies.

In my class at St. Amelia’s school in Tonawanda, NY, we collected nickels and dimes in a cigar box to buy a pagan baby. These babies, we were told, didn’t know God. It cost $5.00.

When I entered first grade, I came home  one day and excitedly told my mother that I was getting one.

And when I got it, I was going to take care of it all by myself.

My mother wisely refrained from saying much about it. She went to Catholic school too, and I don’t know if they had pagan babies then, but I bet they did. And of course, she knew that no pagan baby was coming to stay at 159 Findlay Avenue, no matter what I said.

Anyway, I misunderstood about getting a pagan baby. 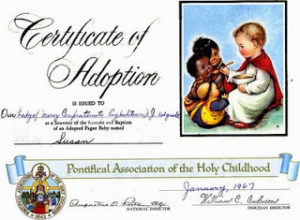 You didn’t buy one with the $5.00. That $5.00 bought you naming rights. Your class picked out a name for the child,  and the Catholic church baptized the baby with that name into the Catholic faith.

The class received a certificate for each child they named. Fierce competition existed between some of the nuns as to whose class had the most pagan babies.

A bulletin board held the certificates, pinned to the wall. Some had a lot more than others. Possibly the nuns coerced the kids in those classes into giving more?

I went to Catholic grade school at St. Amelia’s for 8 years.

We must have had at least 5 pagan babies in each class.

That’s 40 babies right there. I think most of them were in Africa and India. Reminiscing about St. Amelia’s brings back many other memories.

And the time I put together a shoe box with all the items I needed to go and baptize my Jewish friends across the street, Amy and Kenny Wolpin.