At one end of this tiny Victorian chapel, set on a lonely hill in southwestern Scotland and overlooking the Bay of Luce, is a glassed-in wall. Three of the earliest Christian stones ever found in Scotland sit inside it. 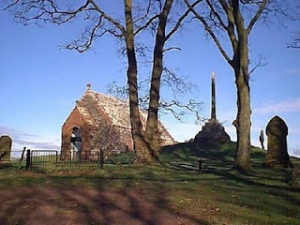 They were erected around 450 A.D. to mark the common grave of three priests who served in the area. For 1400 years they stood unmolested in the churchyard until 1850, when they were pulled up and taken away for another use.

It is thought that the three priests may have served with St. Ninian at his “Candida Casa”, or the white house on the hill across the bay. Ninian is a character in Eleri’s Tale. 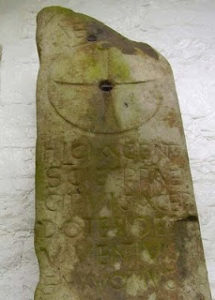 Two of the stones are about 7 feet tall, with the third being about 3 feet. All 3 stones have an early Chi-Rho symbol carved at the top. Each cross is surrounded by a perfect circle, deeply cut into the stone. The circle is a symbol of eternity.
Below the Chi-Rho symbols are the Latin inscriptions. They were meant to stand together and form a continous narrative. The translation of the Latin is:

“Here lie the holy and eminent priests, Viventius and Mavorius (first stone), and Florentius, (second stone), and on the third stone “INTIUM ET FINIS”, the Beginning and the End. 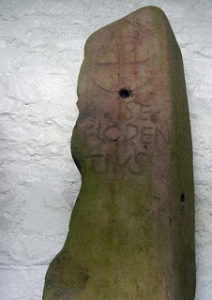 If you look carefully, you can see Mavorius listed under Viventius. Florentius is quite obvious.
I used the names Mavorius and Florentius for the characters of 2 priests in Whithorn in Eleri’s Tale. This is an example of how archaeological research can drive the story.
In 1861 the two taller stones were discovered in the manse gate. The third stone wasn’t found until 1916.

But that’s a story for another post – the “lost” stone of Kirkmadrine.