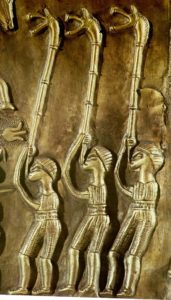 I have been feverishly revising my 1st manuscript after the writer’s conference I attended last week. It’s been fun reading and experiencing my very first story again and I had several thoughts to blog about.

Writing historical fiction is fascinating because I learn so much doing the research. Re-creating an ancient world means learning about everything from medicine to music, clothing, architecture, weapons, food, and more.

In my first manuscript, set in 5th Century Ireland, one character is a blacksmith and a bronzesmith. A bronzesmith would have created the instrument called a carnyx.

A carnyx was a massive rolled tube of bronze in a sort of reverse “S” shape, as pictured in the photo. It would have been heavy and it would have required a strong man to carry and play it.

It’s thought that these horns were played as tribes were going into battle and they were also used during royal funerals and solemn ritual occasions.

I discovered a site that is devoted to the study and re-creation of ancient music. It has only been in the last few years that musicians figured out how to play these ancient horns. Reproductions were cast and one brilliant person had the thought that the carnyx might be similar to the Australian didgeridoo.

That proved to be the key. A fascinating website you can check out is http://www.prehistoricmusic.com/. I have corresponded with one of the musicians there, and I have one of their CD’s. There was one particular song that I listened to repeatedly while I was writing a funeral scene.

You can listen to some of the music if you go to the site. click on “music” and then click on “sounds” for a sample. I promise you it is unearthly! You will be hearing sounds that until recently hadn’t been heard on this earth in thousands of years.