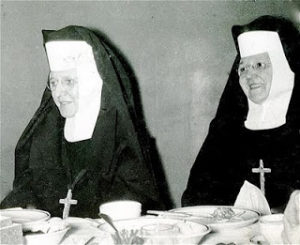 For most of my childhood, I wanted to be a nun.

I went to Catholic school for 12 years, first at St. Amelia’s, then 4 years at Cardinal O’Hara High School. In the heavily Polish and Italian suburb of Tonawanda where I grew up, nuns formed a huge part of my childhood.

I had Felician sisters in grade school at St. Amelia’s. All born in Poland. Their habits included a high starched white forehead piece with the veil draped over it. They all had names like Sister Amabilia, Sister Conceptia, and Sister Anthonille.

I mean they RULED. You never talked back and every response had to have “Sister” added onto the end of it. “Yes, Sister.” “No, Sister.” “Right away, Sister.”

I loved my 1st grade teacher, Sister Laurentine. She must have been close to 70 at the time she taught my class but she was very kind. I think Sister Laurentine first made me want to be a nun. I ran into her at Ted’s one summer day after 1st grade, and I was speechless. It seemed odd to see her outside St. Amelia’s. Nuns ate hot dogs? Who knew?

As a child,  I thought you had to be a nun or a priest to be closer to God. Later, I learned that wasn’t true. But the desire for the religious life stayed with me until high school.

One of my sisters wanted to be a Sister of Charity, founded by St. Catherine Laboure. They wore the big starched flying wimple sort of 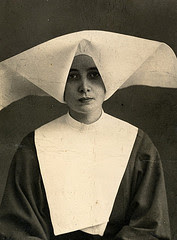 habit in the photo to the left. Honestly, how did they ever get anything done with that headdress? You’d have to walk through a door sideways!

And sometimes I wanted to be a Maryknoll nun, because of a book in our school library named Bernie Becomes a Nun.

I checked it out frequently and perused the many photographs that showed Bernie going into the convent and becoming a postulant, then a novice, and then finally taking her permanent vows.

Another book in our library listed every order of nuns in the world. I think there were about 1000 different orders. The order that fascinated me the most was the Pink Nuns. They even had a picture and their robes were pink. I am not making this up! 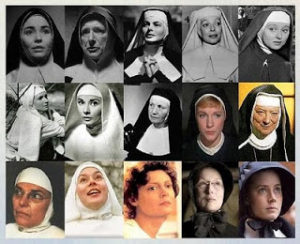 Nuns have always been a popular subject in Hollywood.

I loved the movie Heaven Knows Mr. Allison with Deborah Kerr. There was definitely something romantic about nuns that appealed to me as a young girl.

And when I was little I used to take all the white towels in the house and dress up like a nun. No lie. Thank goodness there aren’t any photos of this, although my parents sure missed a good photo op.

Although I wanted to be a nun for most of those grade school years, I never thought of myself as particularly holy.

There were two girls in our class that I did think of as holy. I won’t mention their names but they went to 11:30 AM communion every day.

In 6th grade, our class had to vote for one girl to drop a garland of flowers on the top of Mary’s statue in the church.  It may have been December 8, the feast of the Immaculate Conception. I’m sure everyone voted for one of these “holy” girls, but, lo and behold, Sister Anthonille announced that I had won! I absolutely know that she switched the vote to me.

The worst thing was, on the day of the crowning, she insisted on brushing my long bangs off my forehead and pinning them up with bobby pins. And I had a big pimple on my forehead. I was completely embarrassed. And to make matters worse, I missed the cue to drop the flowers on Mary’s head, forcing the class to sing the same stanza of the hymn several time until I woke up and did my job.

In 7th grade, my teacher, Sister Frederick, decided the entire class would go to 11:30 communion every day, whether we liked it or not.

Now, in the Catholic Church, there are two kinds of sins, venial and mortal. Venial sins were the lesser sins, like disobeying your mother, or lying. Mortal sins were the really bad ones. Like murder and adultery.

You cannot take communion if you had a mortal sin on your soul.

If you did, then you had committed a sin of sacrilege, and that was the worst sin of all. I don’t remember just what mortal sin I thought I had committed.

But for some reason, my family hadn’t made it to confession the previous weekend, or the weekend after that. So I went to communion eleven times with a mortal sin on my soul.

When I finally made it to confession, I confessed that I had eleven sins of sacrilege on my soul.

After 8th grade I begged my Dad to let me go into the convent.

I had found a religious order in New Jersey that allowed girls in their high school to become a sort of pre-postulant. Usually a softhearted pussycat, this time my dad put his foot down and said no. There was “time enough to do that after I graduated from high school.” Of course, in the 9th grade at CYO and Cardinal O’Hara, I discovered boys and my “vocation” flew out the window.

I am grateful for my Catholic education. The nuns taught me about God while they taught me to read. We learned to respect God, respect  them, and to respect others. And I’m sure glad my dad didn’t let me join the convent when I was thirteen!

The nuns also taught me about Pagan Babies. But that’s another post.
Previous Post
Clonmacnoise, County Offaly, Ireland
Next Post
Pagan Babies Where Did They Go?