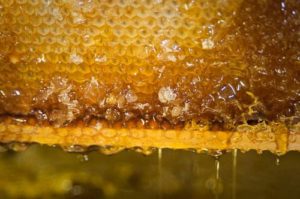 Did you know that honey has been used for at least 2,000 years as a dressing for wounds and burns?

Ancient medicine and the use of herbal potions and tinctures play a role in my first two early historical novels. In the first, A Secret Hope, I gave my character, Ciara, an intuitive interest in the practice of medicine and the curative uses of herbs, roots, bark, and berries. And honey!

The ancients didn’t know that honey has anti-inflammatory and anti-bacterial properties, but they knew that it worked.

The use of honey reduced pain, healing time, and it decreased scar formation. Plus it smells good!

I recently read about a 15 year old boy who contracted meningococcal septicemia. He developed peripheral necrosis (tissue death) of his hands and feet. He had to have bilateral amputations of both legs mid-tibia (shin bone), and also lost most of his fingers. His hands healed well but he had many unsuccessful skin grafts to his legs. His dressing changes took place under anesthesia because of the intense pain they caused.

Within a few days the skin on his legs began to improve. In ten weeks his wounds had healed and he went on to successful rehabilitation.

The ancients also knew that the resinous gummy substance the bees sued to glue their honeycombs the bees, called propolis, had therapeutic effects, too.

Bees also produce propolis. They use propolis to glue their hive together, and also erect a defensive ridge of the stuff at the hive door. To make propolis, they mix resins from the buds of conifer and poplar trees with beeswax and other secretions.  These resins have germicidal properties. In A Secret Hope, Ciara helps to gather the precious propolis when they perform the annual cleaning of the hives.

But don’t reach for that jar of honey in your kitchen pantry just yet.

Medicinal honey used for wounds and burn is sterilized first to kill botulism spores. But you can now buy Manuka honey dressings in your local drugstore, if you’re so inclined.

Something to think about the next time you stir a teaspoon of honey into your tea or sweeten your oatmeal!