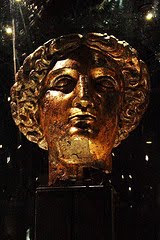 In Bath, England, lies a great archaeological treasure, the Roman temple of Sulis Minerva or Aquae Sulis, built on the site of hot mineral springs.

Archaeological excavations have revealed that human use of the springs dates back 10,000 years.

Neolithic hunter-gatherer tribes frequented it first, followed by the Celts, who arrived in Britain about 700 BC and built the first shrine. 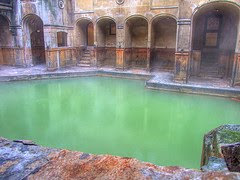 The Romans arrived in 43 AD and took over the Celtic shrine. “Sul” or “Sol” was a Celtic deity associated with the sun. In time, the Roman goddess Minerva became identified with the shrine, thus the name Sulis Minerva.

The main spring bubbles out of the ground at a rate of a quarter of a million gallons each day and maintains a constant temperature of 120 degrees. It was a sacred site, where man was thought to be able to communicate with the underworld and where people came to worship and seek the goddess for healing. 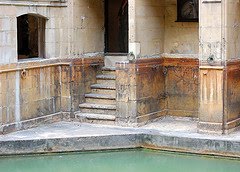 Archaeological excavations have revealed thousands of objects at the spring’s bottom that were sacrificed as votive offerings. It was the custom to sacrifice only a precious and perfect object.

In my first book, one of my characters offers a sword to the gods by ritually breaking it and depositing it into a pool.

More than 12,000 coins were found at the bottom of one of the pools and proves that the custom of tossing a coin into water accompanied by a wish is a very ancient one! 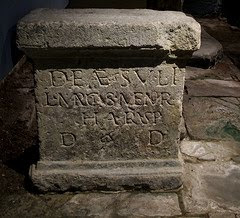 Here is one of the Roman altars found at the baths. Offerings of wine and fruit would have been left on the top for the gods. 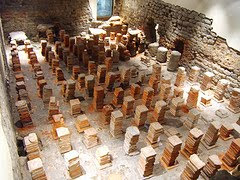 These stacks of tiles held up the floor of one of the bathing chambers such as the calidarium. Pipes would have run through this area to heat the floor above. 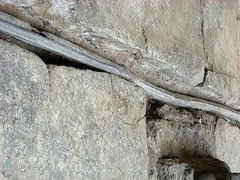 This is one of the original Roman lead pipes that still function today to carry water. 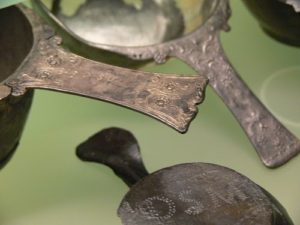 These mirrors are some of the objects found at the bottom of the spring. Most of them have the words “to the goddess Minerva” inscribed on them and the initials of the person offering it. Lead tablets were also deposited into the springs with requests to the goddess.
Bath received its name from the mineral springs associated with it. At least 43 minerals have been identified in the waters.

I haven’t yet seen Bath for myself but I hope to one day. Hmmm, maybe a character who finds herself in ancient Bath? Could be fun.