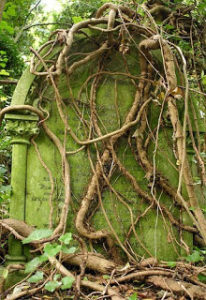 Built in Victorian London in the 1830’s, Highgate had importance as one of the “Magnificent Seven.” Privately built and owned, these cemeteries offered the dead a peaceful, quiet place to repose.

You see, the crypts and church graveyards in Victorian London were overflowing, due to the increase in London’s population, and the subsequent increase in the mortality rate.

So people started to bury their loved in ones in their back yards and other illegal burial sites. Soon the foul stench of decomposing flesh permeated every corner of the city. So Parliament agreed to build seven cemeteries to address the problem.

Highgate was number three. The visionary who imagined Highgate employed a renowned architect and master gardener to construct the masterpiece you can see today. You will find brilliant architecture, gorgeous gardens, and amazing funerary monuments.

Some of the architectural places to visit are the Colonnade, Egyptian Avenue, the Circle of Lebanon, and the Terrace Catacombs. Interest in ancient Egypt remained high in the 1830’s, and this interest is reflected in Egyptian Avenue.

It’s a magnificent structure, with sixteen vaults on both sides of a passageway, entered via an imposing arch, which you can see in the photo above. Shelves for twelve coffins occupied these vaults. Individual families could purchase these for personal use.

This avenue led to the Circle of Lebanon, built in the same style, with twenty vaults on the inner circle. The 1870’s saw sixteen more vaults added.

Highgate Cemetery is a mysterious place, full of birds and flowers and ivy-covered trees. But it’s the monuments that take your breath away.

One poignant monument is that of the famous bare-fisted pugilist Thomas Sayers. Of the ten thousand people who attended his funeral, the honor of chief mourner went to his dog, Lion. Now memorialized in stone, Lion faithfully watches over his master’s grave.

Another poignant monument is that of Mary Nichols, the photo below left, of an angel sleeping on a bed of clouds.

But at the end of the 19th century, interest in Highgate declined. The Victorian practice of elegant funerals fell by the wayside with the advent of WWI and WWII. By the 1960’s London had abandoned Highgate, and it fell into ruin and decay.

However, all that changed in 1975. A group of people interested in seeing Highgate restored to a place of beauty got together and formed The Friends of Highgate Cemetery. 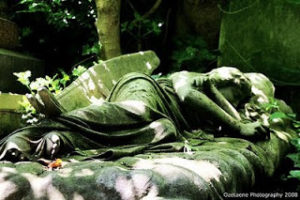 Consequently, they took over the care of repair and maintenance, and as a result, you can walk among the wooded grounds filled with flowers and singing birds, much as the Victorian did almost two hundred years ago.

Some say that Highgate is haunted.

Whispered tales of vampires, the “Devil Ghoul,” and the “Mad Old Woman” abound at Highgate. So don’t visit at night!