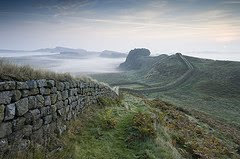 Hadrian was the Roman emperor who built a wall across what is now the “waist” of Scotland. Hadrian wanted to “separate Romans from barbarians.” The Wall marked the northernmost boundary of the Roman Empire.

The Wall was built by Roman legions in the year 122. The wild northern reaches were cold and inhospitable and a far cry from the warmth of Rome.

Originally the Wall would have been 14 feet high. Turrets and milecastles marked it at intervals.

The Picts and Scots who lived north of the Wall would have never seen anything like it. It would have had a psychological effect as well as being a physical wall. In front of the wall, on the “wild side”, there would have been a deep vallum, or ditch, as further protection. On the protected side, a paved Roman road was built that would allow 2 chariots to drive side-by-side.

For a lovers of archaeology the Wall is a fascinating place to visit. Much of the Wall remains standing, and many of the Roman forts can be visited today. Discoveries are still being made and digs are ongoing. (Digs – that’s archaeology-speak for a site being actively investigated!) 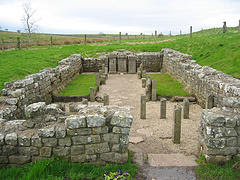 This is the site of a temple to the Roman god, Mithras. Mithras was a particular favorite of soldiers. No women allowed! In my second novel, Eleri’s Tale, my character investigates the ruins of a Mithraic temple.

If you’re interested in learning more about Hadrian’s Wall country, you can check out http://www.roman-britain.org/. Everything you might want to know about Roman Britain is there.