Women who lived 1500 years ago (the time period of my second novel) were just as concerned with beauty as women are today. They used combs and mirrors, cosmetics and the implements to apply them, and wore jewelery. 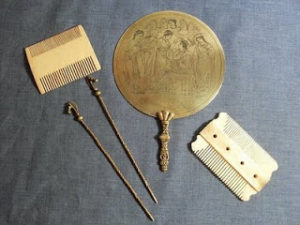 In the time period of Eleri’s Tale, only wealthy women had access to these things, especially cosmetics. Shown above is a set of Roman implements, including bone combs and long hairpins. The mirror is made of polished bronze. 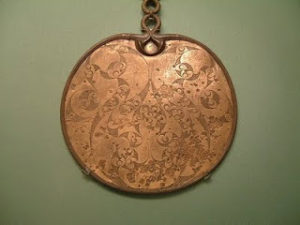 In Eleri’s Tale, both her former mistres Ciara, in Ireland, and her new mistress, Minacea, possess bronze mirrors such as the one shown above. This is a mirror that was found in Britain and done in the Celtic La Tene style, with elaborate curvilinear designs that would have been applied with the use of a compass. 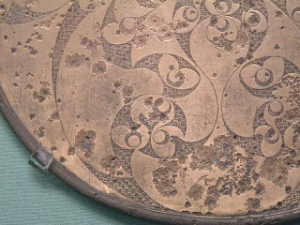 This particular mirror is in the British Museum, and dates to about 50 AD, several hundred years before my story takes place, but it gives you an idea of what the mirrors looked like. The reverse side would have been highly polished and given a fairly good reflection.

The details feaure a cloverleaf pattern, engraving in a basketweave pattern and “hatched” texturing. Doesn’t it look gorgeous for its age?