Archaeologists discovered the world’s oldest face cream in 2003 when they excavated a Roman temple on the banks of the River Thames in England.

This little tin pot is 2,000 years old. The lid still bears the fingermarks of the person who last used it.

Richard Evershed, of the University of Bristol in the UK, analyzed the creamy ointment. Mr. Evershed has an unusual research niche. He analyzes the composition of ancient medical, food and cosmetic concoctions, usually by studying residues leftover on old pottery.

They also detected starch, likely isolated by boiling roots and grains in water. In addition, the cream contained a tin dioxide mineral called cassiterite with the chemical formula SnO2.

Then the team recreated the ointment. I don’t know who tried it first, but here is their opinion:

“This cream had a pleasant texture when rubbed into the skin. Although it felt greasy initially, owing to the fat melting as a result of body heat, this was quickly overtaken by the smooth, powdery texture created by the starch. Remarkably, starch is still used for this purpose in modern cosmetics. 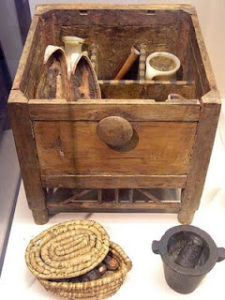 Wealthy women treasured their cosmetics and beauty implements 2000 years ago as much as we do today.

The cosmetic box shown to the left especially fascinates me. It’s Egyptian, and has nothing to do with The Fury of Dragons, but it’s such an amazing box.

It contains a pot, 2 vases, a pumice stone, a cosmetic dish, a pair of sandals and a kohl pot. Discovered in an Egyptian tomb, it dates to about 1550 BC. There is something so incredibly poignant about that pair of sandals (bottom left of box).

In The Fury of Dragons, my character Eleri watches her Roman-British mistress, Minacea, prepare for a banquet.

The cosmetic slave used long-handled spatulas to mix the cosmetics for Minacea’s face. Many toxic ingredients in ancient cosmetics, such as mercury and lead, whitened the skin.

Below is a wood, bronze and carved bone cosmetic box that was excavated from Pompeii. You can see a mirror on the left and other implements and jars. 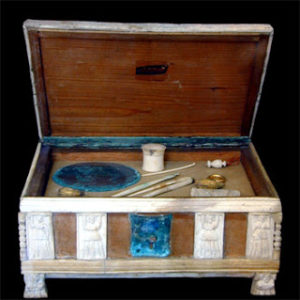 Maybe it’s the archaeologist in me, but to hold that ancient tin of the world’s oldest face cream?

It’s like touching history. Touching a person who lived in the remote past. Suddenly, the past doesn’t seem so far away!