The discovery of Tutankhamen’s mummy with his floral and beaded collars made world headlines in 1922. Most paintings of ancient Egyptians depict them wearing the same decorative collars around their necks.

But before that, American archaeologist Theodore Davies made an interesting discovery in 1908 while excavating in Egypt’s Valley of the Kings.

He excavated a dozen storage jars, containing broken pottery, animal bones, bags of natron and sawdust, and pieces of linen. The linens had markings that date to years six and eight during the reign of a little-known Pharaoh, Tutankhamun.

And some of these pieces ended up at the Egyptian collection at the Metropolitan Museum of Art. Over time, the curator realized that the animal remains probably represented a funeral meal. The linens and natron remained as embalming refuse from the mummification of Tutanhkamun. 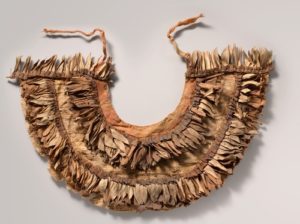 And the curator’s analysis became an important clue to the discovery of Tut’s nearby tomb in 1922 by Howard Carter.

I find these beaded and floral collars fascinating. The amazingly preserved collar to the left demonstrates its construction. It contains alternating rows of flower petals and blossoms, leaves, berries, and blue faïence (a type of glass) beads.

Linen ties secured the collar around the neck after the flowers and beads had been sewn to the papyrus backing.

Some of the flora in the top collar are persea leaves, blue cornflowers, blue lotus petals, and nightshade berries. The lotus flower remains a perennial Egyptian favorite, symbolizing death and rebirth. 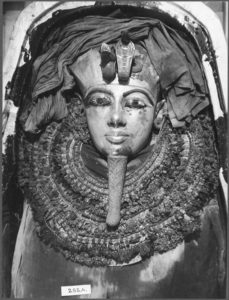 KIng Tut and his floral collar

This photo shows the sarcophagus of Tutankhamun with his solid gold face mask and floral collar in place.

If you go here, you can see more of the collars chosen for Tutankhamun’s funeral preparations.

Some of the collars in the cache were bound with red cloth. The resulting combination of red, green, and blue would have been very colorful.

And Dr. Carter found many other objects wrapped up in Tut’s layers of linen bandages. Rings, scarabs, and amulets made of green feldspar, carnelian, red jasper and lapis lazuli.

Because I’ve had a fascination with Tutankhamun since childhood, Tut was the subject of my very first post! It took Dr. Howard Carter over ten years to describe and catalog all the artifacts found in King Tut’s tomb. I could write posts on the discoveries for another ten years.

Previous Post
Hope and Expectation. And Answered Prayer.
Next Post
Cabin Fever: I want to go to Rome!