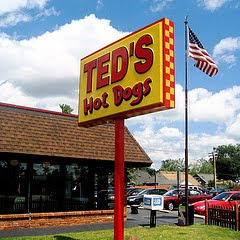 Many of my childhood memories of growing up in Tonawanda, NY revolve around food, and Ted’s Hot Dog Stand is one of the best.

I grew up on Findlay Avenue in the 50’s and 60’s. There were three main favorite food places from my childhood. And Ted’s is the one I remember most fondly.

We lived around the corner from Ted’s. If my sister Bernadine and I could wheedle a quarter out of my mom, we’d go there after school for a bottle of pop and some popcorn. You pulled an icy cold bottle of pop from the big cooler in the corner. Teds also had big dispensers of their famous loganberry drink.

When I look back now I realize what a great childhood I had.

All the mothers on our half of the block stayed home. They talked to each other over the back yard fences while they hung laundry on the clothesline. The moms kept an eye out for other people’s kids.

In Tonawanda, we had the run of the neighborhood. Played outside all day and our mothers never knew where we were, but they didn’t worry either. In the vacant lot next to the railroad tracks we  searched for polliwogs, or rode the bumpy hills there on our bikes. Almost every summer day we walked a mile down Sheridan Drive to Delaware Pool. A mile! And we were all so young.

My mother whistled when she wanted us to come home to 159 Findlay Avenue.

She would stand at the foot of the driveway and whistle down the block, one long note followed by a second lower note, and we always knew it was her.

If we didn’t have any money we’d collect pop bottles in our red wagon and return them to the A & P. The small ones were worth 2 cents and the big ones went for 5 cents. We could get candy bars then, 6 for a quarter at Leader Drugs, and they were way bigger than the fun-size candy bars you get today. Bonomo’s Turkish Taffy was a favorite. I liked the vanilla. I can still sing the jingle.

Another favorite place was Jet Donuts across the street from Ted’s. It’s gone now, but to this day I have never eaten a Bavarian cream donut that could rival theirs. And believe me, I’ve tried.

And of course, for anybody who lived in Tonawanda, there was Anderson’s Custard stand – still thriving today. On a warm summer night, there would be rings of parked cars radiating out in circles around the little stand. Windows open (no AC in cars then), WKBW playing on the radio. Ah, the sweet sounds of summer in Tonawanda.

Anderson’s lemon ice was to die for.

I managed to get back a few years ago, and my sister and I stopped at Anderson’s. I ordered the lemon ice.

Maybe my taste buds had gotten older, but it just didn’t taste the same. It had a chemical aftertaste, nothing like the lemon ice I remembered – tart and sweet and icy, all at the same time, and so refreshingly lemony that you ate in in tiny bites to savor the flavor as long as possible.

And then there’s pizza, and beef on weck, but I’m running out of room!