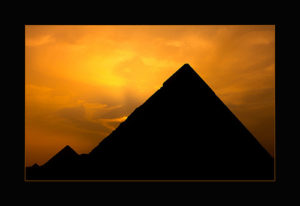 I’m writing about the Pyramids today because I need some inspiration and Egyptian archaeology always animates me. 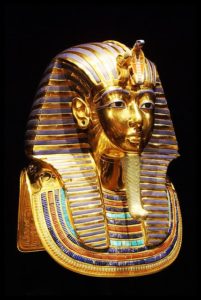 The Pyramids have held a deep fascination for me since childhood, when my Dad brought a home a vividly illustrated coffee table book on the discovery of Tutankhamen’s intact tomb in the Valley of the Kings.

That became my very first blog post. The photo of Tutankhamen’s gold and jewel-encrusted burial mask has become an iconic representation of Egypt and is said to equal the worth of England’s crown jewels. 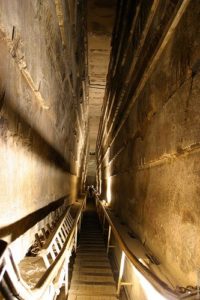 Above is the Grand Gallery inside the tomb of Cheops, also called the Great Pyramid of Giza. It leads to the King’s burial chamber. Just look at that mysterious staircase, built thousands of years ago. I want to be there!
On a tour to Israel in 1978, our group was to have a day in Egypt. But because we had entered Israel first, the immigration officials wouldn’t allow us into Egypt. Instead we had a day in Rome (fabulous!). You might think that one day isn’t enough time to see much but believe me, you can pack a lot into one day if you’re motivated.
Still, I was disappointed at not getting into Egypt. I have a friend who thinks that we will be in Egypt together one day. Maybe on a dig? Perhaps to promote a book? Hmmm. Sounds good to me! 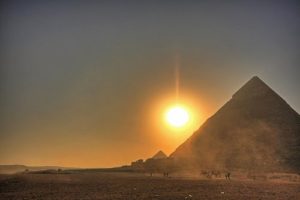