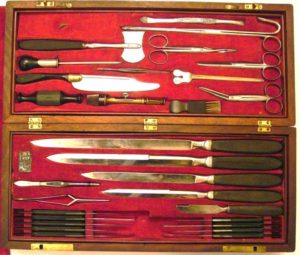 I’m researching a new story about a Civil War nurse. As an RN myself, it’s fascinating to see how far nursing has come in the last 150 years.

Disease and infection killed far more soldiers than outright battle wounds. And many of the infections resulted as a result of amputations.

This is an actual army surgeon’s amputation kit. It looks clean and shiny now but in actuality the instruments would have been covered with blood, bits of flesh, dirt and bacteria. It’s amazing that any of the men survived!

Sometimes in the absence of chloroform or whiskey, these amputations would have been completed while the patient was awake. It seems horrible but we have to remember that at that time in history, amputation was seen as a last chance at life. My character will have quite a time of, ministering to these sick and wounded men. 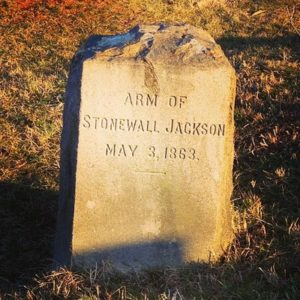 In May of 1863, Confederate General Stonewall Jackson was accidentally shot by one of his own men when returning from a midnight reconnaissance ride. His left arm had to be amputated and is buried in a family graveyard in Chancellorsville, Virginia.
The General was taken away to recover from the surgery but died eight days later. The rest of Stonewall is buried in Lexington, VA.
As I read through historical accounts of civil War hospitals and battlefields, I am very thankful for antibiotics and sterile operating rooms!
Previous Post
My new book cover! Status: THRILLED
Next Post
Third Time’s the Charm!