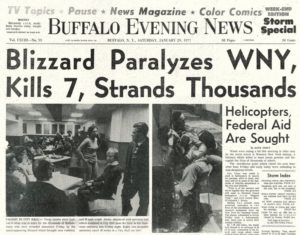 I survived the Blizzard of ’77

I didn’t know that surviving the blizzard of ’77 loomed ahead of me when I hurried out of the house running late for work on Friday, January 29, 1977.

I worked as a nurse for a professional physician review group in downtown Rochester. The drive from the little college town of Brockport, NY where I lived took forty minutes, so I was already behind.

My cranberry midi-coat was the only item of winter clothing I grabbed. (A popular overcoat in the 70’s that reached to, you guessed it, the middle of my shins.) No hat, no scarf, no gloves, no boots. Totally unprepared.

I didn’t know that all of the preceding November and December weather conditions had catalyzed to create the perfect storm that resulted in the Blizzard of  ’77.

Blissfully unaware than an Arctic front had swept eastward through the northern Great Plains to the Midwest, preparing to unleash hell on western NY, I continued on my merry way. TGIF, right?

And then the snow began to fall as the storm hit Rochester. Our supervisor dismissed us before noon to get home before it got too bad. 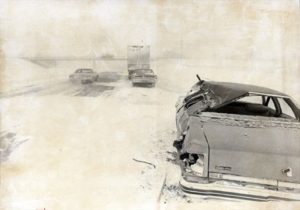 Abandoned cars during the Blizzard of ’77

But it was already more than serious. Snow had piled up and numerous accidents had occurred. I joined a slow line of cars traveling out of Rochester and turned off onto Route 31 West that would take me the rest of the way home.

The drive in my  little green  ’67 Mustang quickly turned into white knuckle driving.

Yet somehow I pushed on, an inch at a time.  Occasionally the wind would shift and restore visibility for a moment. In that tiny window of sight, dead and abandoned cars lay everywhere off the road, overcome by the combination of extreme cold, high winds, and blowing snow. Doors hung open, attesting to the haste with which the occupants had left, and snow had sifted inside, covering the seats. Like the end of the world.

Somehow my 67’ Mustang kept going, moving ever so slowly on the snow-covered road.

The heater couldn’t keep up with the dropping temperature. My insides clenched into a tight painful knot.

Hours later, I made it to Spencerport, about halfway home to Brockport. It’s hard to describe the churning in my stomach, the fear and anxiety, made so much worse because I was alone.

Farm country surrounds Spencerport and Brockport. Long expanses of fertile fields surround both sides of 31. So beautiful in summer with the tall fields of corn. But now, over these open fields, snow had drifted into incredible walls of snow fifteen feet high in places. Cars and trucks were everywhere, stuck in the wall of snow.

Thank goodness for the snowmobilers. They were the only ones that could get around easily in the storm. Volunteers were ferrying people away, presumably to a safer place in the town.

Then my Mustang  got stuck going over a smaller bank of snow.

Friendly snowmobilers came over and pushed me out. They offered me a ride into Spencerport, where emergency warming shelters had been opened.

But I wanted to try and make it home. Call me crazy.  And I did get home. Somehow my little Mustang chugged along, continuing to pass abandoned cars, until I pulled into the driveway on Erie Street in Brockport about 8 pm.

It had taken me eight hours to drive twenty miles. 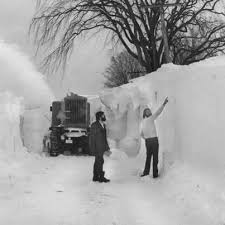 Walls of snow during the Blizzard of ’77

I was so thankful. People from all areas of WNY found themselves stranded far from home. Our pastor called and asked if we could take in some of them. They stayed with us for a week, becoming friends, until the roads were cleared and they could return to Rochester. All of western NY was in a state of emergency. It took over a week to clear the streets and get back to normal.

Only later did I find out that people had died.

They stayed trapped in their cars until the gasoline ran out and the temperature inside the car dropped. One man in Buffalo was found frozen to death.

That could have been me.

Looking back, I know I should have stopped in Spencerport when I had the opportunity. Even now, I don’t know why I persisted in getting home. But the Lord had mercy on a foolish girl that that fateful day in January, 1977.  And to this day, I give Him all the glory for surviving the blizzard of ’77.