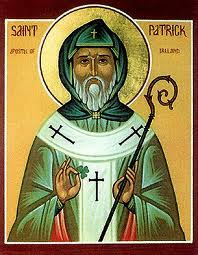 Since St. Patrick’s Day falls in March and because Patrick is a character in my recently published e-book, A Secret Hope, I thought I’d do a couple posts on him.

There are many myths regarding Patrick, embellished over the centuries, partially because after potatoes and alcohol, the Irish love nothing better than  a good story!

I imagine most people think of Patrick looking like this saintly icon. However, in my story, Patrick is a living, breathing, very human man. I picture him looking something like the second photo.

Most people don’t know that Patrick was not Irish. He was Romano-British, born into a culture that began in 43 AD with the Roman conquest of Britain.

Over the following 400 years, Roman soldiers and their families met and intermarried with people from the various British tribes, under the rule of the

At the age of 16 Patrick was abducted by a
group of Irish sea-raiders and taken across the
sea to Ireland, where he worked as a slave for
6 years before making his escape back home.

Patrick had Roman blood. Therefore I like to think that he very likely had dark eyes and hair, and possibly a large nose.

Christianity was present in Ireland before Patrick returned as an adult to preach the Gospel. Britain and Ireland raided each other’s coasts continually for slaves and booty and some of these captives were Christians. But it was Patrick who truly lived, preached, and spread the Good News.

Patrick is credited with the creation of the Celtic Cross, the subject of my next post.