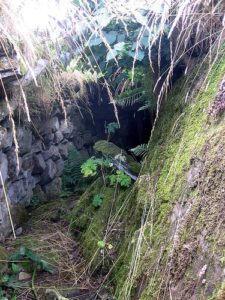 A souterrain is an underground passage, or chamber, found in Ireland, Scotland and other countries such as France.

The underground temperature stays fairly even and in pre-refrigeration days these souterrains would be perfect for salted meat, grain, and wine.

The walls and ceiling of the souterrain were lined with stones. 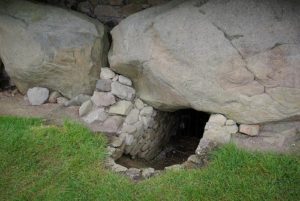 Here is the entrance to a souterrain in Scotland, placed under a “kerbstone,” one of the giant stones at the base of a Neolithic monument. 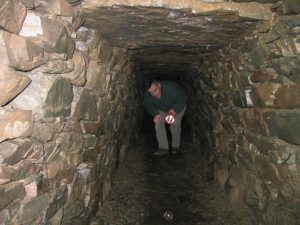 This is another photo deep inside a souterrain. I found this photo on Flickr and I don’t know the man in the picture but he doesn’t look very comfortable! Note the water standing in the floor of the souterrain. 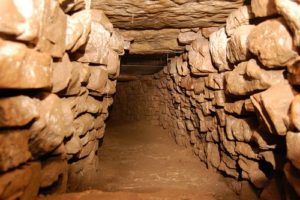 Here is another large souterrain. Despite the feeling the photo gives you, souterrains were not usually very deep underground. Those are grass roots hanging down from the ceiling.
A very climactic scene in my first novel, Ciara’s Tale, takes place in a souterrain. Doesn’t that photo above look creepy? Now just imagine this souterrain by candlight!
Previous Post
Sulis Minerva
Next Post
Prehistoric Music