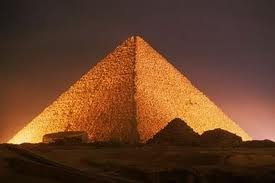 The Great Pyramid of Giza is the oldest and largest of a group of three pyramids situated in the Giza Necropolis of Egypt near Cairo.

It’s also called Khufu’s Pyramid or the Pyramid of Cheops (Greek for Khufu), and it was built for the Fourth Dynasty pharaoh about 2560 BC.

The Great Pyramid is the main structure of complex that includes two mortuary temples and smaller pyramids for Khufu’s wives.

I’ve written about this pyramid in an earlier post  – the photograph of the Grand Gallery in the tomb fascinates me. There are three known chambers inside: the King’s chamber, the Queen’s chamber, and an unfinished chamber.

The features of the Great Pyramid are so large they can be seen from the moon!

One of these day I’m going to see it in person.