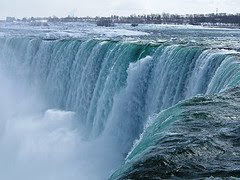 Niagara Falls isn’t far from the town of Tonawanda in western New York where I grew up.

In the late 60’s we went there on dates, and after proms. And sometimes when we were bored and had a little money in our pocket, we’d hop into our car and take a spin over to the falls.

I’ve seen the falls in every season and every kind of weather, crammed with tourists or virtually deserted.

But I’ve always felt that Niagara Falls is most beautiful in winter.

It’s dangerous then, and there aren’t as many visitors. The most potentially lethal areas are blocked off, and usually you can’t get as close to the falls as you can in summer. This is due to several things.

First, being close to Buffalo and Lake Erie, there is almost always a thick layer of snow on the ground. Then, because of the continuous mist that is produced by the falls, there is a layer of ice over the snow. On top of the ice is a layer of moisture. As anyone who lives in the Buffalo area can tell you, water on top of ice is deadly. Extremely slippery! 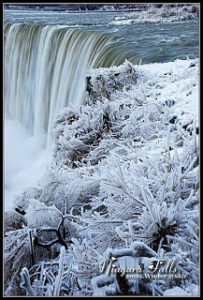 That’s why certain areas are roped off, so you don’t slip and slide right through the bottom of the fence and over the falls like Sam Patch, the Yankee Leaper.

But it’s exactly this combination of factors that makes Niagara Falls a winter wonderland. With the continuous mist, layers of ice build up until every tree, every bush, every stem, and every fence rail is thickly coated.

When the sun comes out, it’s like fairyland. Everything glitters!

It’s also very cold. So wrap up well if you decide to make the trip. Frostbite is no fun.

In 1969 the US Army Corps of Engineers actually “turned off” Niagara Falls.

They wanted to determine if there was anything that could be done about the huge rocks that sat at the bottom of the falls due to erosion.

They dammed or redirected the river somehow, reducing the mighty Niagara Falls to a mere trickle. Two bodies were found, and hundreds of coins. People from around the world flocked to see the incredulous sight.

It was as if the moon had been plucked from the sky. A “Day the Earth Stood Still” kind of moment.

It felt so weird! And somehow just not right.

From June 12 to November 25 of that year, Niagara Falls remained “off.” Everyone was happy when the dam was removed and the thunderous waters of the Niagara River were free once again.

Years later, the engineers decided to do nothing about the rocks and let the falls continue to erode naturally.

I’ve always wondered what the early explorers experienced on the river.

What if they didn’t know about the falls? The undertow of the Niagara River is very strong and by the time they realized they had a problem it might have been too late to get back.

The tremendous roar and power of the water is hypnotic. You hear the falls before you ever get close enough to see them. Niagara Falls has a fascinating history. Tightrope walkers crossed the falls and many people have tried to go over the falls in barrels and other contraptions. Some survived, but many didn’t.

I found an article from 2016 that states Niagara Falls might be turned off again. Wonder what they’ll find this time!