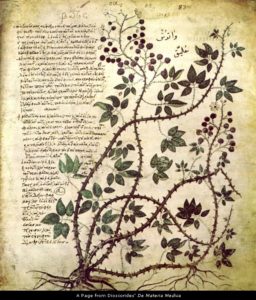 Pedanius Dioscorides was a Greek physician, born about 30 AD in Asia Minor (now modern Turkey). Two thousand years after his birth he is still remembered for the major contribution he made to medicine and pharmacology.

Dioscorides was attached to the Roman Empire armies of Nero, and in this capacity he traveled extensively throughout Italy, Gaul (France), Spain and North Africa. Everywhere he went, he observed plants in their natural habitat and noted how the local folk used them.

He personally researched each plant and its uses. About 65 AD, he wrote De Materia Medica, “Regarding Medical Matters”,on the “preparation, properties, and testing of drugs.”  The result was a five volume book on the uses of over 1,000 plants and minerals.

Unlike previous herbals, Dioscorides instead organised his material into therapeutic groupings based on similarities of medicinal action. Originally written in Greek, it was later transcribed into Latin and Arabic.

For nearly 1500 years, De Materia Medica was the supreme authority on medicine and pharmacology in western civilization. No original copy of Diosccorides’ work remains, but several copies published in the 16th century are in museums today.

The oldest and most famous copy is an illuminated Byzantine manuscript produced about 1512 for Anicia Juliana, daughter of Flavius Anicius Olybrius, who had been emperor of the western empire in 472 AD. The page above is taken from this manuscript and you can see some annotations in Arabic.

Dioscorides also included some recipes for making perfume in his De Materia Medica. Perfumes in ancient history weren’t the liquid perfumes we know today, but instead were manufactured in an oily or buttery waxy base. In my second manuscript, I used Dioscorides’ recipe for perfume using yellow flag (iris) root, myrrh, balsam and honey.