Since childhood, crypts, catacombs and Ireland’s passage tombs have fascinated me.

The Megalithic passage tombs of Ireland are one of the great wonders of the world.

And in my novel of ancient Ireland, A Secret Hope, my character Ciara hides inside a passage tomb on Slaibh Callaigh, the Mountain of the Witch. There is a cluster of passage tombs here on the Loughcrew mountains, and the largest is Cairn T, which I used for the scene.

Newgrange is one of Ireland’s biggest passage tombs, or passage mound. The inner passage into the mound is over 62 feet long. The passage and massive stones have  ancient Megalithic art carved on them.

The passage tombs at Knowth, Dowth, and Newgrange were built about 3200 BC. They predate Stonehenge and the Pyramids of Giza.

These passage tombs had spiritual, ceremonial, and astrological significance for the ancient people who built them. Among other things, they could determine the summer and winter solstices.

The winter solstice is the day that marks the shortest day and the longest night of the year. 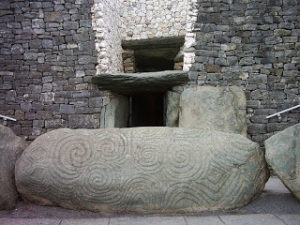 Carved Kerbstone and entrance to Newgrange

To the left is the entrance to the Newgrange passage tomb. Note the roof box above the lintel.

On the morning of the winter solstice, usually around December 21 or 22, the rising sun would shine through the roof box and illuminate the chamber’s carved backstone.

What was its significance?

This is how the ancient people who built these passage tombs determined  when the midpoint of winter had passed. Now the days would begin to lengthen. This caused celebration and rejoicing for a people who suffered great hunger, cold, disease, and death during the long, dark days of winter.

The sun was returning!

Try to imagine the joy and relief of watching that sunlight come down the passage and make that backstone glow like gold. It meant the worst of the darkness was behind them and the days would get blessedly longer now.

On my research trip to Ireland, I stood in the darkened chamber of Newgrange with my husband and other tourists and waited for the recreation of the sunbeam to enter the dark passage tomb. Although it was an electric light beam that came down the passage and hit the backstone, I still felt a little of the thrill the ancient people must have experienced when they realized the sun would return to them.

Newgrange is designated as a World Heritage site.

And because so many people want to experience the real thing when the sun rises on the December winter solstice a lottery is run. Over 30,000 people apply to win one of 50 places.

However, if you can’t win the lottery, you can see a beautiful simulation of the winter solstice sunrise below. Each day the sun travels a little further down the stone path until the day it lights the backstone.

Mike Fox, who runs several different sites on Ireland’s passage tombs gave me permission to use photos from his site. You can check his site out HERE.