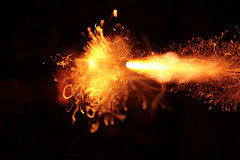 In the opening scene of Deanie’s Tale, Deanie and her maid, Oonagh, are traveling under cover of night, headed toward Dublin where they will sail to Liverpool, England and from there on to Boston.

Deanie’s father needs to carry a gun in one scene, and I loved the idea of a Colt revolver tucked into his belt.

But were Colt revolvers around then? I dig around and find out that Samuel Colt invented the Colt revolver in 1835 and received a patent to manufacture them in 1836. OK so far.

Samuel Colt was something of a boy wonder. While still a teenager, he conceived the idea for the revolver on a voyage to British East India and he whittled a wooden model. In his twenties, after some fits and starts, he built a factory in Connecticut.

After the outbreak of the Mexican War, General Zachary Taylor called for thousands of Colt revolvers and the rest is history. 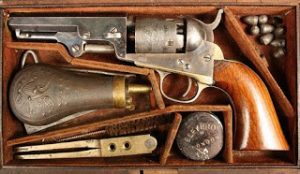 Above is a great photo of the Colt Baby Dragoon, in its original case with all its accessories. The photo at the top is a photo of a Colt revolver being discharged.

I looked through a lot of information online about the history of firearms in Ireland. I read more on Colt revolvers. I exchanged emails with a gun collector who gave me some very good information.

I narrowed it down to 2 possible firearms, the regular Colt Revolver and the 1848 Pocket pistol, which came to be known as the Colt Baby Dragoon. The Colt revolver was almost 15 inches long, probably too heavy and long to carry tucked into your belt. The barrel alone was 7.5 inches. The Baby Dragoon was shorter and lighter, with a barrel that measured 4 inches and a weight of just 1.5 pounds and it was specifically designed to be carried in a pocket.

So now I have to decide which gun I want my character to carry. Looks like it will have to be the Baby Dragoon. Then again, maybe I will have him carry both. I just love the thought of my character’s jacket falling open and the sight of that Colt revolver tucked into his belt. Maybe if I make him tall enough it wouldn’t be so outlandish?

Guess I’ll have to see!