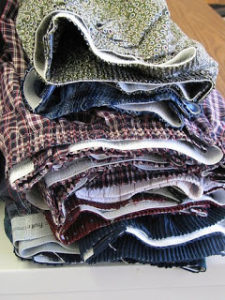 By far, the procedure we do the most is the colonoscopy. Which brings me to the topic for today.

For the life of me I cannot understand why a man, in our unit to have a colonoscopy, would ask if he can keep his underwear on.

The first time this happened, 14 years ago, I thought the patient was kidding. But he wasn’t. So I guess I’m used to the question by now but honestly, if you know where the colonoscope goes, how could you possibly think you should wear your underwear into the procedure?

So I started telling the male patients, after I had given them the gown to change into, “you need to take off all your clothes INCLUDING YOUR UNDERWEAR.” I figured this would take care of it.

One time I came into the room after the patient had changed, and as I helped him into the bed I could see that he still had his underwear on. So I said to him “Now I know I told you to take off your underwear. Why didn’t you?” (I said this very nicely, not mean.) And he said “I didn’t suppose you really meant it.” True story, no lie.

Now if a patient asks me if he can keep his underwear on, I tell him it’s OK if he has a trap door in it. (This is only if I think the patient has a good sense of humor.) Or sometimes I’ll say “Now what do you think?” At which point he smiles sheepishly.