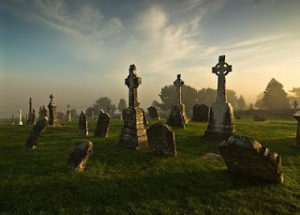 Clonmacnoise was a monastery founded about 454 AD by St. Ciaran. He chose the site for its ideal location at the junction of river and road travel in Celtic Ireland.

Ciaran didn’t live to see the growth of the monastery. He died of plague at the age of 33, only 4 years after founding it.

The remains of the stone chapels and buildings that stand there now date to the 10th century. The original structures would have been built of wood.

Clonmacnoise became a great center of learning, attracting scholars from Ieland and Europe. There was a Scriptorium here, where scribes labored long hours to master the skills of illumination that would result in the Book of Kells and the Book of Durrow. 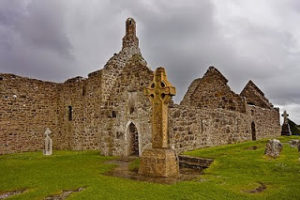 There are many fine examples of Celtic crosses here. You cannot take a bad photo! 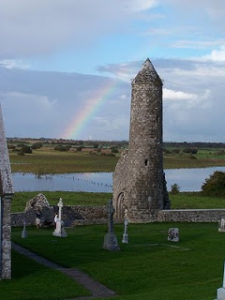 That is the River Shannon behind the round tower in the photo above. Looks very peaceful, doesn’t it? However, much violent history took place at Clonmacnoise. It was destroyed by fire at least 13 times. Imagine an evening 1500 years ago. You are coming in from a long day toiling in the fields. 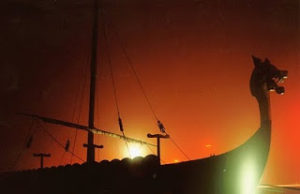 How would you like to see this sailing up the Shannon toward you? 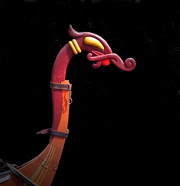 Clonmacnoise was attacked at least 40 times from the 8th to the 12th century. 8 times by Vikings, 6 times by the Anglo-Normans, and 40 times by the Irish.

The monks rebuilt each time.

In 1522 it was destroyed by the English garrison at Athlone, and for the next three hundred years there were no monasteries in Ireland.
Today the National Heritage Service is still working to preserve Clonmacnoise for generations to come.
I have some ideas for a historical novel set in Clonmacnoise. Vikings are involved!
Previous Post
St. Ninian’s Cave, Scotland
Next Post
Nuns and Why I Wanted to be One!