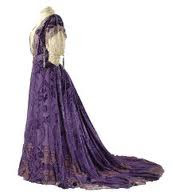 One of the pleasures of doing research for historical novels is learning about cultures different from my own. This applies whether I am writing a story set in the 5th century or the 19th Century.

Charles Frederick Worth was an English designer who lived in Paris and is considered the “father” of Haute Couture. He dominated Parisian and American fashion for the second half of the 19th century.

Before he started designing and making everything from peignoirs to ball gowns for American aristocrats and European royalty,
women usually bought fabric and brought
it to their own dressmaker.

Worth was different. He spent hours in museums, studying old paintings for his inspiration. He used every type of material available, from silk to velvet to brocade in his garments. He was also the first designer to “sign” his designs, with a label that was sewn into the dress.

He made 7 Rue de la Paix in Paris the place to go for superlative style.

Many of his gowns are in museums today. The Metropolitan Museum of Art has a large collection, also the British Museum in London, and the Costume Institute.

Pictured here are just a few of his creations.

Of course, to wear these beautiful gowns required a corset reinforced with whalebone stays, and laced to an 18 or 19 inch waist.

Often the weight of the gown, due to metallic beading, real silver and gold thread embroidery, fringe, tassels, and crystals made the gown very heavy to wear.

I think it’s better to look at them and imagine wearing them at a ball, sweeping across the floor in a Viennese waltz!