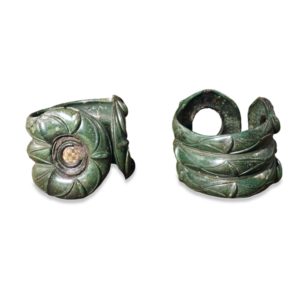 In my second novel, one of the main characters is Coroticus, a Romano-British chieftain who ruled the area of Strathclyde in what is now western Scotland.

When I am writing a story like this one, set in ancient times, I use my archaeological research to drive part of the story.

When I discovered this pair of bronze armlets, I had Coroticus wear them. They are a massive pair, weighing over 3 lbs. each!

Because of this, some archaeologist have suggested that real people wouldn’t have worn them but instead they were perhaps intends for large statues.

This sounds plausible but no such statues have been found that could wear them. This pair of armlets presently resides in the British Museum.

They were discovered in 1854 over the entrance to a souterrain (a stone-lined underground cellar used for storage.)

A souterrain played a part in my first novel and I will post about that next.