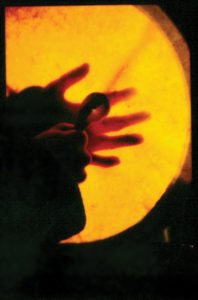 Another ancient instrument which dates back to the Stone Age and is still used today is the bodhran, or Irish drum.
The bodhran has a narrow wooden frame with an animal skin stretched taut across one side.
Variations of this type of frame drum appear in other ancient civilizations such as Egypt, China and Africa.
The Irish bodhran has one important difference, and that is the way in which it is played. Most methods of playing a drum consist of a stick or a hand beating the skin frame.
A Irish musician playing the bodhran bends their rhythm hand so that the back of the fingers are presented to the skin of the drum. The player swings his hand up and down and uses the middle finger as a beater.
The other hand is inside the drum and is used to alternate or damp the tone of the drum. A two-headed stick is also used to play the bodhran as illustrated in the photo below. 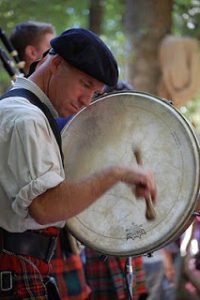 If you’ve never heard a Celtic band, you owe it to yourself to hit an Irish pub, have a beer, and enjoy the music.
Previous Post
Crotals
Next Post
Honey and Ancient Medicine