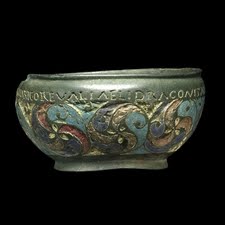 You know how we go on vacation and buy souvenirs to remember that special time? Ancient Roman souvenirs that date to the time of Hadrian’s wall have been discovered, suggesting that high-ranking soldiers and officers did the very same thing.

Roman Emperor Hadrian built a great wall across what the north-west frontier of the Roman Empire, in what is now modern-day England, close to the border of Scotland.

This wall took six years to build and stretched 73 miles from Wallsend in the east to the Solway Firth in the west.

It took about six years for three legions of infantrymen from the army of Britain to complete the Wall. Each legion had about 5,000 men. These soldiers had the responsibility of major construction tasks like building stone forts and bridges.

Along the wall, an active military line for three hundred years, stood seventeen major forts, with many more mile castles and turrets built for defense.

Consequently, communities would spring up outside the forts. Camp followers, merchants, farmers, etc., all had something to sell for the soldiers who could afford to buy their goods. 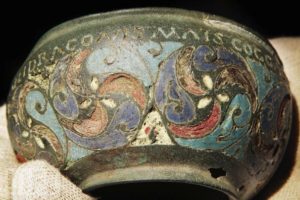 It is believed that the two bowls featured in this post are ancient Roman military souvenirs of the time. Like buying a coffee cup or a set of salt and pepper shakers with “Niagara Falls” or “Las Vegas” emblazoned on it. Probably only high-ranking Roman officers could afford to purchase these.

Because these discoveries fascinated me, I featured these antique Roman souvenirs in my second historical novel, The Fury of Dragons.

The bowl, above, is the Staffordshire Moorlands cup. Experienced metal detectorists out for a walk discovered it in 2004. If I lived in England, I’d be out there with a metal detector, too!

The names of the first 5 forts on Hadrian’s Wall are engraved along the top rim. It originally had a handle and might have been used as a type of skillet. It dates to the 2nd century.

And in the photo, above, you can see the name “DRACO” inscribed on the top left. It’s uncertain if Draco was the owner of the bowl or the person who manufactured it. 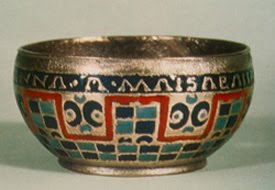 The left photo is of a copy of the Rudge cup, found at the bottom of a well at the site of a Roman villa in Wiltshire, England. It shows a representation of Hadrian’s Wall with its turrets and mile castles. The cup dates to the first half of the second century and also lists forts on the Wall.

I hope you find these ancient Roman souvenirs as fascinating as I do. I visited Hadrian’s Wall in northern England in 2008 while I was writing The Fury of Dragons. Fascinating country!
Previous Post
Staffordshire Hoard, Biblical Inscription
Next Post
The Ancient Art of Blacksmithing