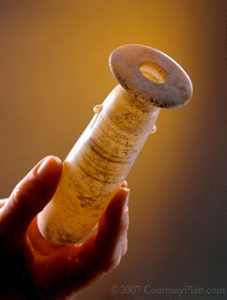 Perfume has an ancient history.

Incense was the first perfume. The ancients burned many types of resins, woods, and herbs for their religious rituals. A few posts back I mentioned that red grains of incense were found in the recently discovered in the tomb of the Apostle Paul.
Fragrance is frequently mentioned in the Bible, from the frankincense and myrrh of the the three Kings, to the fragrance of the myrtle tree.
It is thought that Egypt was the first culture that incorporated fragrance and Cleopatra was said to be lavish in her use of perfumes.
In my historical novel, Eleri’s Tale, I mention a precious perfume whose recipe came from Discorides, an ancient Greek physician, pharmacologist, and botanist. It contained cassia and cinnamon in a base of sweet flag root and olive oil with a touch of myrrh.
The alabaster perfume bottle in the photo is 2400 years old and was excavated from an ancient Greek shipwreck in Turkey in 1999. The photo was taken by Courtney Platt and appeared in the March 2002 National Geographic magazine.
Previous Post
John 2:5
Next Post
St. Ninian’s Cave, Scotland