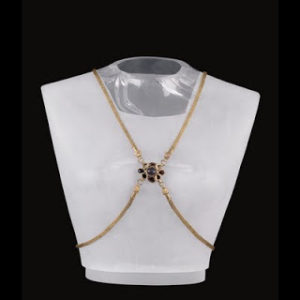 The body jewelry worn by Minacea, with amethysts, garnets, and pearls in a gold setting.

I use historical research to drive much of the plot for my historical novels, which means that I usually don’t know how the story is going to end until I get there.

As I mentioned before, I love archaeology and the study of ancient civilizations. Many of the artifacts that people use in my stories have come from historical finds.

In my second book, Eleri’s Tale, the British chieftain Coroticus’ wife, Minacea, is dressing for an important banquet. The gold body chain shown above is a piece currently in the British Museum in London. It was part of the Hoxne hoard, found buried in Hoxne, Suffolk, England in 1992.

The hoard was buried in the 5th century and the piece itself dates to the late 4th century.

It contains an oval setting of gold for 9 gems:a central amethyst, 4 garnets and probably 4 pearls, which had long since decayed when the body chain was found.

This is the body chain that Minacea puts on as the finishing touch to her outfit for the banquet.

It is an exceedingly rare piece, and in marvelous condition considering that it’s about 1600 years old!