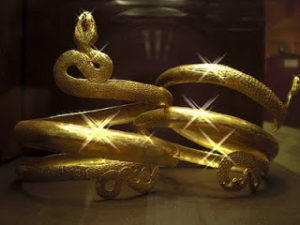 Continuing my thoughts on ancient jewels, my character Coroticus in my current novel, Eleri’s Tale, wears a pair of bronze armlets similar to the ones in the photo.

Coroticus was a fierce British chieftain whose name is known today chiefly because he abducted a group of St. Patrick’s converts in Ireland shortly after their baptism and brought them to Britannia to be sold into slavery on the auction block.

Patrick’s response was to write a scathing letter that circulated among the churches in Roman Britain and condemned Coroticus for his heinous deeds, which included “giving girls away as prizes” without a second thought.

The armlets in the photo are actually Greek and made of gold. The pair that I used as my model for Coroticus are in the British Museum but I was unable to locate them in their current database.

The British Museum has a great website, http://www.britishmuseum.org/, and it’s a lot of fun to navigate around the site. Currently they have an exhibition on the Aztec rulers.