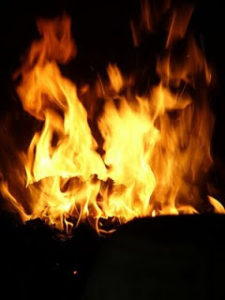 I learned a tremendous amount about the ancient art of blacksmithing and charcoal making researching my first historical novel, A Secret Hope.

The bible contains one of the oldest references to blacksmithing in Genesis 4:22:

“…Tubal Cain, an instructor of every craftsman in bronze and iron…”

In ancient times, people regarded blacksmiths almost as gods because of the mysterious way they used earth (iron ore), water, wind and fire to produce iron.

We don’t think much about this now, but in other times, without the ancient art of blacksmithing, there would be none of the instruments people needed to live, produce food, and defend themselves.

For example, swords and knives, plowshares and hoes, pots, pans, and hooks are just a few of the articles fabricated by blacksmiths.

In the 5th century time period of A Secret Hope, the blacksmith had his smithy out in the open, away from other buildings. He used a leather apron and his clothing had singed holes from flying sparks. Muscles bulged in his biceps and forearms from swinging the heavy hammer all day. Burns in various stages of healing would cover his hands and arms. 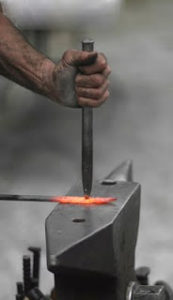 I have a blacksmith character in A  Secret Hope.

In May of 2005, I corresponded with a blacksmith named PawPaw Wilson, through a website called AnvilFire. PawPaw helped me get the finer points of blacksmithing correct and critiqued some of my writing.

Other blacksmiths from AnvilFire also helped, among them Thomas P and Atli. They offered lots of information, even trying to help me figure out what freshly “quenched” iron smelled like. (That’s when the hot iron is plunged into water to cool it.)

Blacksmiths, historians, and engineers populate the AnvilFire site. They’ve got a lot going on there!

Among other things, they help novice blacksmiths with all aspects of blacksmithing.  Check out their website: www.anvilfire.com.

And these days, with the threat of EMP’s hanging over our heads, it might a good thing to know a blacksmith!
Previous Post
Ancient Roman Souvenirs from Hadrian’s Wall
Next Post
Christmas Eve 2009